A short history of the Bowmen of Bruntwood

Our founder was Trevor Francis, who had served in World War Two as a glider pilot. Like most glider pilots, he sustained a 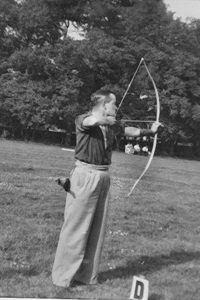 spinal injury which stayed with him after his return to civilian life, and as this ruled out more robust sports, he settled on archery.

Unable to find an archery club nearby, he decided to form his own. In 1950, he held the inaugural meeting, with six other people, at his flat in High Street, Cheadle. They called themselves the Cheadle Bowmen.

There was no shooting ground initially but eventually Trevor and his friends found a field near to Bruntwood Hall, then the home of Cheadle and Gatley UDC. Because of this, and to avoid confusion with the other Cheadle in Staffordshire, the name was changed to the Bowmen of Bruntwood. The Club was affiliated to the Grand National Archery Society in 1952, and soon began to make its name known at tournaments.

The original field is now the pitch and putt course. During the mid-1960s, the Club agreed to move to its current field, and has been there ever since.

An indoor range was the next requirement. At the end of the 1960s the Club took over the single-storey building that had been built a century earlier as a stable when the present car park was a farm yard, and with a massive effort by club members, transformed it from semi-dereliction. Further action over the years has refurbished and updated it.

Although in the UK the traditional longbow still forms an important element of the sport, archery equipment was 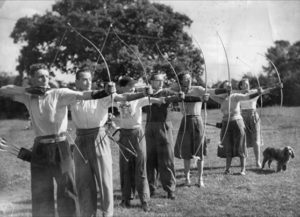 beginning to evolve during the 1950s, with the Accles and Pollock tubular steel bow replacing the Victorian longbow, and aluminium arrows replacing wooden arrows. Through the 1960s, the recurve bow with laminated limbs was developed, and through the 1970s, the recurve, take-apart bow, with metal riser (handle) and laminated limbs, came into common use, along with stabilisers,pressure button (to guide the arrow more efficiently past the bow) and clicker (a device to give an audible signal when the arrow has been drawn to the required length).

In the late 1980s, carbon arrows were developed, providing a lighter, straighter and faster arrow. Bowstrings have gone from Dacron to Kevlar to Fastflight, a man-made material stronger even than Kevlar and with amazing endurance. Through the 1980s, the compound bow, where pulleys or cams, plus cables, take over the work of limbs, became more common, having been developed in the USA.

The target archery shot by the Club has, like the equipment, evolved over the years. The traditional rounds are shot to imperial distances of 100, 80, 60 and 50 yards, while the more recent World Archery metric rounds are shot to 90, 70, 60, 50 and 30 metres. The field is marked in yards and metres along one side to accommodate both types of round. There are also shorter-distance rounds, both imperial and metric, for juniors and novices, and in the indoor range rounds can be shot at either 20 yards or 18 metres.

The Club has always encouraged new membership, holding have-a-go days in the park and running as many Beginner courses as the membership and facilities can handle. The Junior Club which was formed in the 1980s continues to flourish.

Thus, over the years, the Club has grown. It affiliates well over 100 members each year, and has produced Olympic, national, regional, and county champions. It caters for all abilities and ages, and includes recurve, longbow and compound archery.

In 2002, the Bowmen of Bruntwood organised a 50th anniversary trip to France not to Agincourt or Crecy, where the English archers are still remembered, but to Stockport’s twin town, Beziers, much further south. The Beziers archers subsequently paid a reciprocal visit to Bruntwood.

Although archery and our Club have evolved and changed over the years, there is still a link with medieval times in our official Club badge which shows two white harts, or male deer. The white hart is an ancient symbol, and was a personal emblem of Richard ll, who gave it as a badge to his Cheshire archers. Our badge was originally designed by our founder, Trevor Francis, and amended in the 1990s by our Juniors Secretary, Peter Galbraith.

Cheshire has had a long association with archery. King Edward III particularly favoured Cheshire archers, and even decreed a uniform of green and white for them. A William Jauderel served with Edward, and was probably a member of the Black Prince’s elite guard of archers. The modern version of the name appears in Jodrell Bank in Cheshire and in the Jodrell Arms pub in Whaley Bridge. The stone-built ancestral home still exists between New Mills and Whaley Bridge on Yeardsley Lane, Yeardsley being the Derbyshire village from which the family originated. By the side of the family home is the original barracks, with arrow slits, where archers gathered in times of war.

Edward’s successor, King Richard II, kept a permanent force about him of at least 300 Cheshire archers, whose thuggish behaviour when they were brought to London led to complaints in Parliament. Henry V recruited 250 Cheshire archers for his Agincourt campaign.

With the development of firearms, archery ceased to be a weapon of warfare, but continued as a sport. Archery clubs came and went during the next centuries. The oldest club in England, the Royal Toxophilite Society, dates from about 1766. The oldest club in Cheshire is Wirral Archers, which was founded in 1858.

Bowmen of Bruntwood is among a number of clubs founded after the second World War.